Spiros Zinelis graduated from the National Technical University of Athens in 1994 from the Department of Mining Engineering and Metallurgy.

In 2001 he obtained his Doctorate from the section of Metallurgy and Materials Technology entitled “Developing of new Ti alloys for Biomedical Applications”. In 2004 became a faculty member (Lecturer) and since 2016 is Associate Professor of Dental Biomaterials in Dental School of National and Kapodistrian University of Athens (NKUA).

His research work summarizes 150 presentations at domestic and international conferences, 120 publications in peer reviewed journals, 12 chapters in books, more than 2000 citations in international literature and an h-index of 28 (google scholar).

He has co-supervised 3 doctorates and 23 Master’s at the Universities of Athens (NKUA), Technological and Educational Institution of Athens Institutional and King Saud University in Riyadh.

He is Visiting Professor at King Saud University in Riyadh and Visiting Fellow at University of Zurich. He has been affiliated with institutions in Europe (University of Manchester, “Charite” The medical University of Berlin) and he has participated in one domestic and two European (Craft) funded projects.

He had been awarded with one scholarship from the Greek State Scholarship Foundations and one from DAAD for research in Germany. 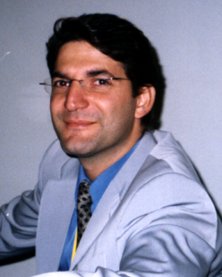 View the publications of Spiros Zinelis on Google Scholar
View